Whilst a Google Chrome engineer says that Firefox is not a competitor, but a partner, it all comes down to competition and numbers. Right now, Google Chrome are ahead of Firefox in browser share market numbers. Chrome had an amazing year in 2011. 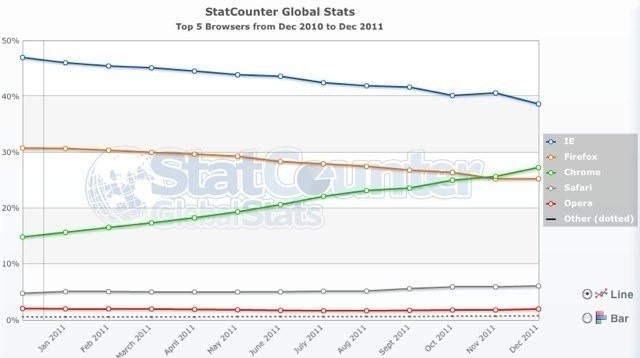 Chrome went from a 15-percent marker share, to 27-percent in December, 2011. Chrome ended 2011 two points above Firefox, who had 25-percent, down from 31-percent twelve months ago. Google haven't been able to replicate this success in their Android browser, which gets slapped around by Apple's mobile Safari across all iOS devices, with 52-percent to 16-percent for Apple and Google, respectively.

The real beast to beat is Microsoft's Internet Explorer which currently holds 39-percent of the browser market. If Chrome keeps going up like it does, I don't see that being a problem for 2012. I use Chrome, and love it. My entire life is synced into Google. Mobile, browser, syncs, e-mail, everything. I'm sure a lot of others are like me, too. Best of all... it's free!