DigiTimes are reporting that Apple is going to unveil its next-generation iPad in January, where it will also unveil two different versions of the iPad. DigiTimes' sources claim that it is scheduled for iWorld which is being held on January 26, 2012. 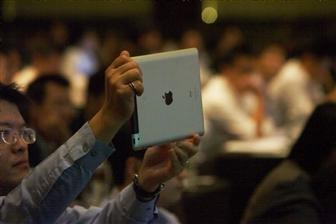 The new models are set to join the existing iPad 2 to demonstrate Apple's iPad series targeting the entry-level, mid-range, and high-end market segments, the sources claimed. The sources said:

The iPad 2 will be competing directly with Amazon's kindle Fire in the price-sensitive market segment, while the new models will focus on the mid-range and high-end segments respectively.

The next iPad is expected to sport the same 9.7-inch screen, but boast a QXGA resolution of 2048x1536, which would be quite amazing. Dual LED light bars are designed for the new iPads to strengthen the brightness of the panels, DigiTimes' sources said. Samsung are will manufacturing the A6 quad-core processors that will be used in the next iPad, with the existing iPad 2 only being the dual-core A5 processor.

Samsung is also expected to supply CMOS image sensors (CIS) for one of the versions of the iPad that comes with a 5-megapixel lens. For all the legal battles that Apple and Samsung have, Apple seem to be on their knees to Samsung when it comes to having their enemy produce the most important parts of one of their most important products.

Should the next iPad be called iRony?