Sony's NGP, PlayStation Vita, enjoyed a first week of record sales, selling 321,400 Vita units in the first 48 hours on sale in Japan. Second unit numbers, however, are much, much lower. 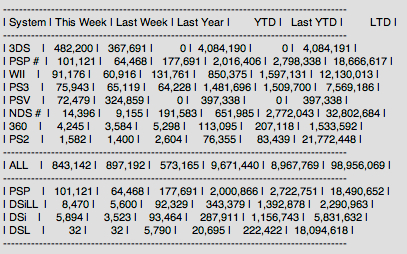 According to research outfit Media Create, who track the Japanese console gaming industry, Sony sold just 72,479 Vita's during the most crucial shopping week before Christmas. A huge decline of over 75-percent versus the first week.

The numbers were so low that the PS3 actually outsold the Vita, with the PS3 pushing 75,943 units versus the Vita's 72,479. The decline reportedly stems from inventory issues, as well as early reports of issues with the Vita. Sony was quick to refuge the allegations, which ranged from laggy gameplay to crashes.

But could this type of news have filtered through to really hurt sales this much? Could it be the lack of good games on the device? The high price? Nintendo's decision to launch their wildly popular Monster Hunter game at the same time? There are plenty of reasons for the lack of sales. Hopefully Sony do something about it soon.