Intel's upcoming LGA2011 server board product, S4600LG (codenamed "Lizard Head Pass") which will be capable of handling 1TB of RAM. Yes, that's 1024GB of RAM. The board is designed mainly for high-performance computing and math-intensive server applications, such as video streaming sites using it for transcoding, etc. 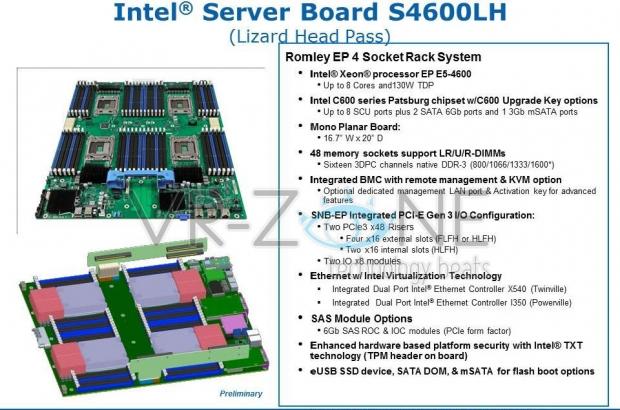 The board is capable of achieving such large memory expansion room by providing three DIMM slots per memory channel, with each socket giving four memory channels. The S4600LG supports the 8-core Xeon E5-4600 series Sandy Bridge-EP processors. The S4600LH is driven by an Intel C600 "Patsburg" chipset with up to 8 SCU ports and 2 SATA 6 Gb/s ports. One of the downsides is the board doesn't have any standard expansion slots, with only two PCI-Express 3.0 x48 risers, which daughterboards with three x16 slots each, can be attached (as shown in the picture above).

The board also sports dual Intel LAN with VT support, KVM and BMT logic is in-built and the board should be available in Q2 2012. 1TB of RAM, doesn't that just sound insane to others? I really think we'll see a shrink in personal machines over the future as Windows becomes much better on resources, but for a server build, this thing is a beast and a half.