It sure has been a busy holiday season this year! So many announcements and releases with todays release from Danger Den. They've announced the latest CPU cooling block - DD-M6 CPU Block, which is the highest performing CPU block to date from Danger Den. 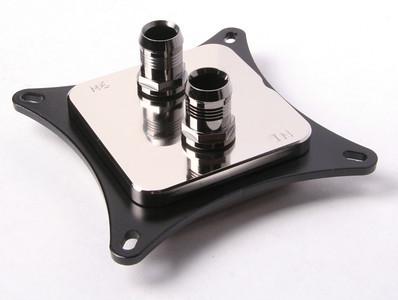 The DD-M6 replaces the long-running MC-TDX block improving upon both reliability and performance. Thermal performance has also received an upgrade, while maintaining low-flow restriction design. The CPU block is available in solid copper and brass parts that are non-plated or nickel plated. A new and improved mounting system is also included in the DD-M6 CPU block package allowing reliable mounting pressure in an attractive package.

Danger Den released a CPU block that we are proud of. Improved performance, built like a tank, and almost 100% produced in the US. The Top Plate, Mid Plate, Hold Down Plate, Hold Down parts are all machined in our facility or within 50 miles of Danger Den. The hold down package has been significantly improved for the LGA 2011 socket and previous socket versions. It looks great and makes the mounting process simple for the consumer.

The DD-M6 will be available for Intel sockets including the newest LGA 2011 package on January 2, 2012.