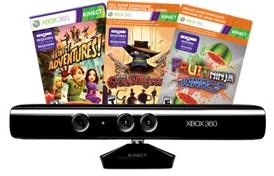 Xbox Ultimate Gaming Bundle has $200 off, Kinect Sensor Bundle (with Fruit Ninja, Gunslinger and Kinect Adventures) is just $99, down from $149 and also included in the Black Friday sales is a free Windows Phone with a two-year service contract.

Xbox Ultimate Gaming Bundle: Up to $200 off.

Free Windows Phone with a two-year service agreement. (The site doesn't yet name the model or carrier.)

Price cuts on games including Madden 2012, Halo Anniversary and others (available in stores only).