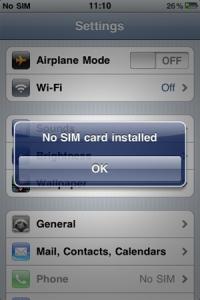 Today, we have reports of a 'No SIM card installed' message coming up for some users. It's affecting all different carriers, across the world, even Sprint and Verizon Wireless users aren't immune to the issue. There are some reports of the problem being resolved with a new SIM being installed, while others believe its the SIM reader itself.

Then we have a group called 'Woo Servers', who believe the malfunction is related to a short circuit caused by a design fault with the SIM card tray. They've gone as far as to provide a detailed list of instructions to remedy the problem with a simple piece of tape as the cure. A piece of tape. Yes. Not everyone benefits from that procedure, though. Links are below for the fox on Woo Servers website.