ASUS may have the amazingly sexy Republic of Gaming boards, but Workstation (WS) series boards are filled to the brim with great detail and are fit for mission-critical environments. The WS-branded boards are usually based on chipsets from Intel's client product lines rather than Enterprise lines. Intel's Sandy Bridge-E 1P platform will get a similar treatment with the P9X79WS. 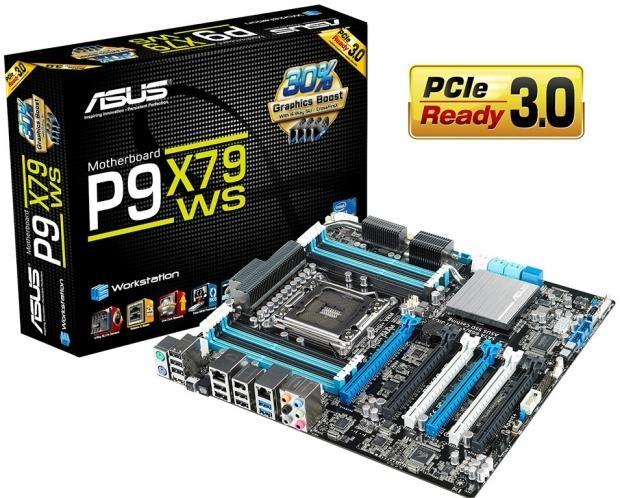 The board is based on an ATX form-factor, and uses the tpyical X79 layout. The socket LGA2011 is powered by a 10-phase Digi+ VRM, which is cooled by a heatsink that shares its heat with a VRM heatsink cluster over the memory VRM, and one over the X79 PCH.

ASUS' P9X79WS features eight DDR3 DIMM slots, supporting SB-E's quad-channel memory, and all PCI-Express slots are long-type, and the board supports 4-way NVIDIA SLI and AMD CrossFire X support. Storage-wise we have two SATA 6Gbps and four SATA 3Gbps from the PCH, two SATA 6Gbps from a discrete controller, and to my surprise, a lack of eSATA.

Six USB 3.0 ports are included with two on the rear panel and four provided by headers, two Gigabit Ethernet connections both from Intel-made controllers, Firewire and 8-channel HD audio.