AMD have invested an undisclosed amount of money into BlueStacks, a "venture-back firm" whose software allows Android apps to run "fast and full-screen" on Windows 7. I posted about BlueStacks earlier this month, and now we have AMD helping them. AMD aren't just helping them financially, either:

AMD and BlueStacks are collaborating to optimize the BlueStacks App Player for Windows software for use with tablet and notebook PCs powered by AMD APUs with AMD VISION technology. With this combination of BlueStacks software and AMD technology, consumers will be able to access their favorite Android apps on virtually any AMD-powered Windows-based device, including more than 200,000 apps currently available in the Android Market.

Bluestacks is a visionary software company that is, seamlessly, making the emerging Android mobile apps market part of the broader computing ecosystem and enhancing such experiences on our award-winning APU platforms. AMD is committed to support such game changing innovators through investment and other activity as we work together to usher in new experiences that allow consumers to enjoy the full capabilities of the brilliant graphics and computing performance enabled by AMD. 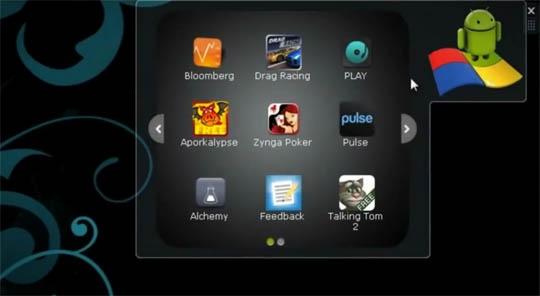 Intel has also expressed interesting in bringing Android-based apps to x86 PCs, with Intel announcing a partnership with Google that will see them working together to bring Android to Atom-powered systems.