Windows 8's UI has undergone some changes as Microsoft received a bunch of feedback due to its developer preview of the upcoming OS last month, where they pledged to respond with a number of changes. Firstly, the app displayed within the Windows 8 App Screen can now be organised into groups, rather than the alphabetical arrangements (as shown in the image below). 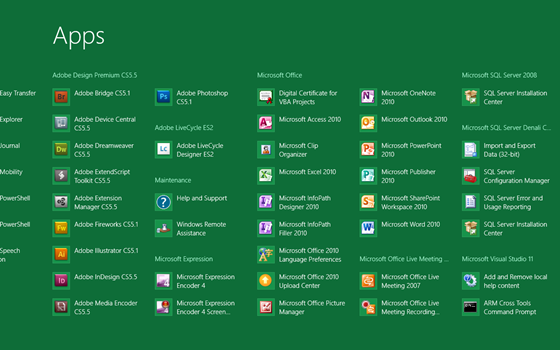 Apps can now be displayed at a higher density, which means cramming more content into the same space. Enterprise users will have the ability to customize their companies' Start screens and unify them across the networks, which is pretty darn cool if you ask me. There's still no word on whether administrators have the ability to opt out of Windows 8's Metro Ui tile-based interface, in favor of the "old-school", Windows 7-esque Desktop app, which is a highly requested feature.

There are many changes Microsoft are baking into Windows 8 and its great to see them so open with their users and implementing them so quickly. Take a look at the Building Windows 8 blog for an absolutely mammoth read, its very detailed and very awesome.