We've been talking about this for a while... but now it seems a concrete date has been set. Google and Samsung have sent invites to various people, tech sites, etc for the rescheduled Android 4.0/Ice Cream Sandwich (ICS) event. Google and Samsung plan to unveil Google's next-generation mobile OS, Ice Cream Sandwich, as well as Samsung's next smartphone, Galaxy Nexus (possibly named Nexus Prime) on October 19, in Hong Kong. The timing coincides with the D Asia conference and would start at 10PM Eastern time. 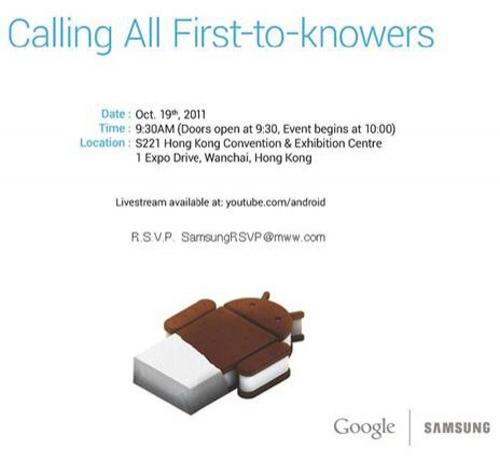 If you can't make it, don't sweat; there will be a live stream for those of us unable to attend. I would suggest organising maybe a towel for all the drool you'll do over your keyboard. Originally, the event was meant to be last week, but as we reported a few days ago, it was delayed out of respect for Steve Jobs. In the US, the new Galaxy Nexus/Nexus Prime should arrive around the date of November 3, and could be a Verizon exclusive, at least in a version with LTE-based 4G.

The new Nexus handset is set to be quite the smartphone, not only packing Google 4.0/ICS, but it's expected to be a heavy modification of the already great Galaxy S II HD LTE with the same ultra-dense, 4.65-inch, 720 screen bent into the same curve as the Nexus S. It may even sport a crazy 1.5GHz dual-core processor, either Samsung's Exynos or a TI OMAP chip, it should also sport NFC for short-range wireless features such as Google Wallet.