The Battlefield 3 beta has given users the chance to either play the beta early (48 hours earlier than the open beta) and for those who didn't, they got a free, no obligation chance to test out the beta to see if they liked it. So far, most people have loved it. But there are of course, the haters. There are issues with the beta, but this is why it is a beta after all. It does not represent the final product, nor does it show off the entire game. 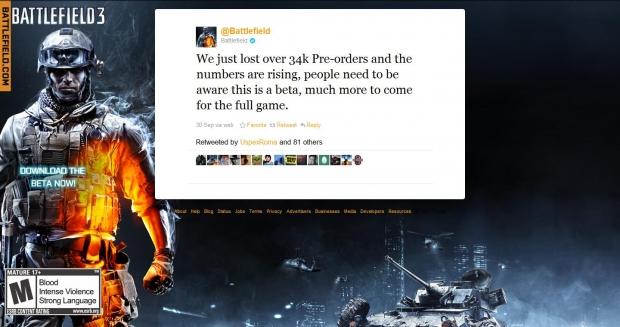 But, there has been a tweet from the guys behind Battlefield 3 have tweeted that they've lost 34,000 pre-orders with those numbers rising. They remind everyone that "people need to be aware this is a beta, much more to come for the full game". I have to reinforce the same thing, it's not perfect for me, but I expect that for a beta. I do expect more from the full game, but I haven't canceled my pre-order. The news of BF3 possibly hitting Steam made me cancel my CD-key order and wait for Steam, though.