In a survey taken last month, 43% of all smartphone owners have an Android-based device. But over the last three months, more than half (56%) chose an Android-powered smartphone. The preferences of these so-called "recent acquirers" are important as they are often a leading indicator of where the market is headed. Of course, Apple's iOS remains popular sitting firmly in second place with 28% of all smartphone users and the same percentage among those who recently acquired a new device. 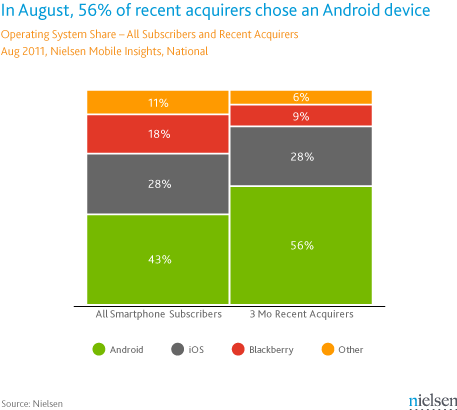 Apple is about to launch their iPhone 5, so things could change. But over in the Android-laden camp, things are also changing. Google are about to launch Ice Cream Sandwich, their next-gen Android OS which is meant to blend their smartphone and tablets OS into a single, dominating OS. Things could swing either way, but right now it seems as though Google are Apple's only competition right now. And while it's "competition", it seems Apple are the ones chasing the tail of Google and they're further down the path than they let you believe.