HTC have sure been quietly brilliant lately with the announcement of yet another Android-based smartphone. The new phone is called the Runnymede and will sport a decent set of specs including Android 2.3.4 Gingerbread with Sense 3.5 on top, a 4.7-inch 800x480-pixel display, a 1.5GHz single-core processor, 768MB of RAM, 16GB of storage, an 8-megapixel camera (720p video, dual flash), a 1.3-megapixel front-facing camera, less than 10mm thick, DLNA and includes HTC's Beats headphones (note: note earphones). 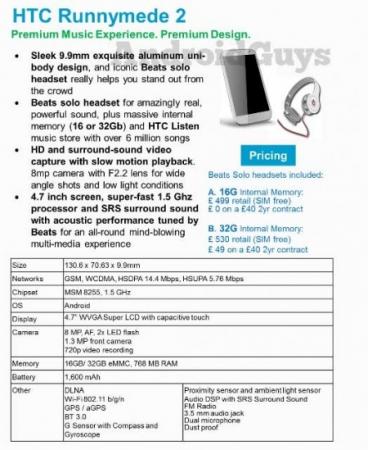 Only a single-core processor? Just an 800x480-pixel resolution? Really? But then, we do have more details on the specs:

The camera, for instance, is said to feature a backlit sensor plus 28mm wide-angle lens and focal ratio of f/2.2 (compared to the iPhone 4's smaller f/2.8); in video mode, it can supposedly capture footage at 60 frames-per-second, more than twice that of the average handset. Obviously sound quality will also play a big role here, with Runnymede featuring SRS Surround, dual microphones, and even recognizing when it's plugged into the Beats headphones.

Is that good enough to sway people to this phone? Considering that the always famous iPhone 4 has a single-core processor, it might be enough.