Fusion-IO are hot off the press from the acquisition of IO Turbine and three weeks after said acquisition already have a retail ready product called ioCache. ioCache is set to compete in the market of products that boost the performance of virtualized apps. The secret herbs and spices of this product is IO Turbine's software that helps virtualized servers manage their access to Flash memory, and enables companies to put workloads such as databases that require fast access to memory in the cloud. 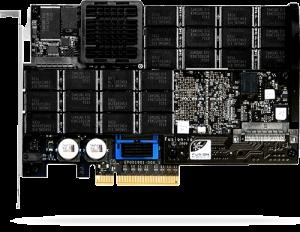 As Flash memory becomes more common inside corporate data centers, we're seeing more and more competition in the market, with companies such as FlashSoft competing too. Because Fusion-io [who primarily builds hardware] purchased a company that does software, they were two peas in a pod. With companies such as Facebook deploying servers with Fusion-io cards inside, this creates a network of distributed storage that needs to be managed.

It just so happens IO Turbine's software can do that, the software works with any solid state drive that uses flash (or even hard drives) and Fusion-io will offer it bundled with its components or on a standalone basis.