Corsair have announced the worldwide retail availability of 90GB variants of their Force Series 3 and Force Series GT lines today. Both SSDs sport SATA 6Gbps, with a maximum sequential read speed of 550MB/sec and a maximum sequential write speed of 500MB/sec. The Force Series 3 uses asynchronous flash memory to provide the industry's best 90GB SSD performance value, while the Force Series GT is designed for enthusiasts who demand the fastest performance available, sports ONFI synchronous flash memory and boasts read speeds of up to 555MB/sec and write speeds of up to 505MB/sec. 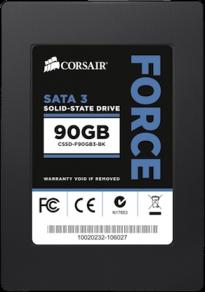 We're happy to add the world's first 90GB SSD to our product lineup. With 50% more storage capacity than our 60GB models and at pricing significantly lower than our 120GB models, they help make the Force Series 3 and Force Series GT among the most robust and flexible SSD lines on the market.