While we're yet to get our hands on some octo-core processors in the form of the upcoming FX series from AMD to battle it out against their thriving competitor, a freshly leaked roadmap today reveals that AMD has even bigger plans already in the works, with some beefy 10-core desktop CPUs scheduled for release next year.

These 10-core chips (codenamed Komodo) will be the successor of the upcoming (Zambezi) FX-Series models. Word of Komodo was out as far back as last year, but at the time was said to have up to eight cores. 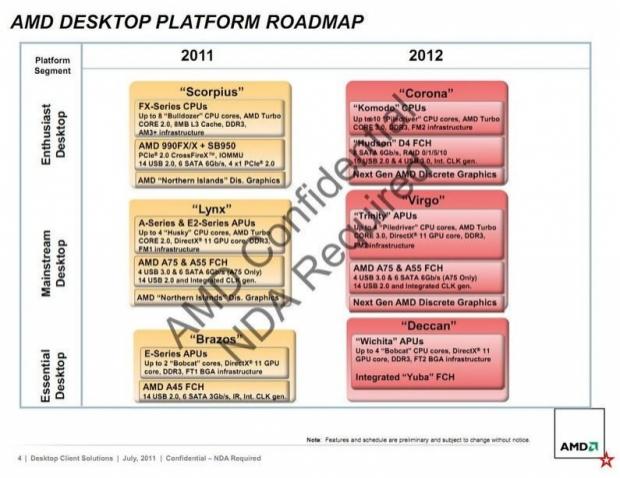 A bit about the CPU. It will use 10 'Piledriver' cores, have Turbo Core 3.0 technology, built-in DDR3 memory controller, housed in an FM2 package and manufactured on 32nm tech. It's being designed for the 'Corona' platform along wit hthe Hudson D4 chipset which supports four native USB 3.0 ports and eight SATA 6.0 Gbps ports.

The leaked roadmap also happens to make mention of a couple upcoming APUs for the mainstream and entry-level desktop segments as well; these dubbed Trinity and Wichita, respectively. Trinity, a 32nm part, will take over where Llano leaves off, while Wichita will take over the E-Series (Zacate) and be manufactured on TSMC's 28nm process.