A leaked AMD roadmap has shown off the Brazos-T series of chips, which is a tablet-orientated chip expected to power a slew of new tablets next year. If the world does not end, it seems AMD are looking to power tablets with some ultra-low powered AMD chips. Currently codenamed "Hondo", it is a ultra-low powered (~2W!) chip based on the Wu-generation of processors. It will also enable Windows 8 time-to-market solutions and is re-architected from the "Ontario" APU. 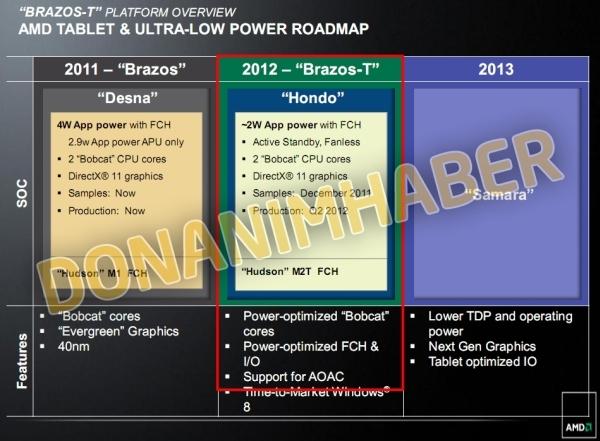 Featuring ~2W App power and sub-4.5W TDP with breakdowns of 2.1W for 720p playback and 1.6W wireless web browsing it ushers in a new meaning of low-power consumption. Based off a 40nm process, it has 2 "Bobcat" cores, DirectX 11 graphics engine, OpenCL 1.1 and Direct Compute-enabled and Full HD playback. It is expected to fall into the <1GHz speed and will include a GPU clocked in at 276MHz.