While PCI-E 2.0 has been more than kind enough to us since its inception in early 2007 with its gobs of available bandwidth on tap, looking over 4 years beyond and now PCI-E 3.0 is becoming the talk of the town.

On that note, it's been rumoured that the benefits of PCI-E 3.0 could be utilized for some folks straight off the bat, providing you are lucky enough to have one of those super duper PCI-E based SSD solutions, such as one of these monsters from OCZ.

WIth that said and done, make way for the world's first PCI-E 3.0 equipped enthusiast motherboard, from none other than ASRock along with Fatal1ty's influential touches. 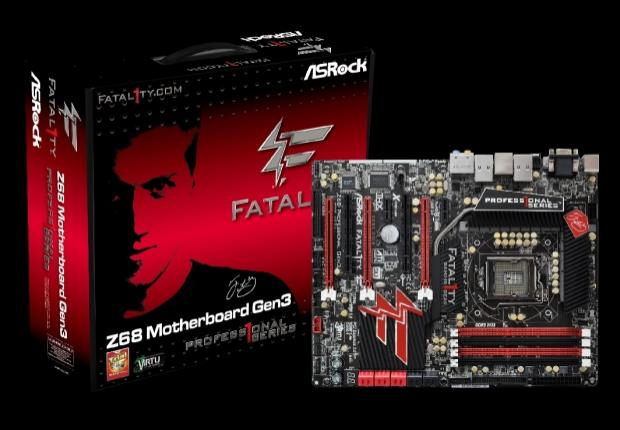 The new Fatal1ty Z68 Professional Gen3 launched today sports every feature you'd expect from a board of this calibre, along with additional future proofing in the PCI-E 3.0 configuration. The board has three x16 slots, two of which are 3.0 slots and the third 2.0.

These expansion slots are of course ready for up to Quad SLI or 3-Way CrossfireX and will be awaiting future bandwidth hungry VGA PCI-E 3.0 graphics cards along with the use of Intel's upcoming PCI-E 3.0 supprting Ivy Bridge processors to kick things up a good few notches.

ASRock has also integrated the PLX PEX8608 chip on this board which is said to allow all PCI-E devices to work at their proper speeds simultaneously.

Of course, in typical ASRock fashion they've made sure not to cut corners elsewhere on this top end Z68 chipset board either, providing all of their exclusive enthusist features along with some additional touches from Fatal1ty such as the Fatal1ty Mouse Port that gives a wider adjustable polling rate range from 125 Hz to 1000 Hz.

The board is said to be shipping at this time and should reach your favourite re/etailer within the next week or so. For further details on the board, you can read the official announcement from ASRock here.