The X370 is based on AMD Fusion technology implementing the E-350 APU dual-core processor along with AMD Radeon HD 6310 graphics. It comes from the X-Slim series from MSI and is very lightweight and slim with it coming in at 1.4kg and it is just 22.8mm thick. It gets a Windows performance rating of 3.8, which is pretty good for a notebook in this class and price range. 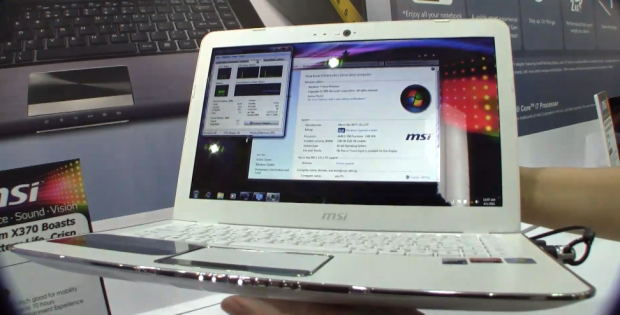 Nicole loves the appearance of the notebook and the chiclet keyboard, but after using it wasn't very pleased with the usability of the keyboard. It comes with a range of ports including VGA, HDMI, card reader and so on.

Nicole eventually got inside the unit and removed the battery and discovered a small four cell 2150mAH battery which might only provide around 1 hour of battery life, but there is also an option to upgrade to an eight cell 4350mAH version, which should extend battery life much further.