This massive sucker of a chassis comes with no less than 19 expansion slots, you have never ever seen anything like this before from a desktop solution. In the demo at their booth they were showcasing the TJ12 with six GeForce GTX 580 video cards. These video cards take up two slots each, still leaving a lot of expansion for other PCI Express based devices at the same time.

SilverStone is able to achieve this feat by introducing a ribbon cable that runs from the motherboard to another area of the case. If you don't want to use all those video cards, the top part of the case is module so that you can add in extra power supplies. As you can imagine, it will fit basically any motherboard you throw at it including quad processor boards and of course the EVGA SR-2. 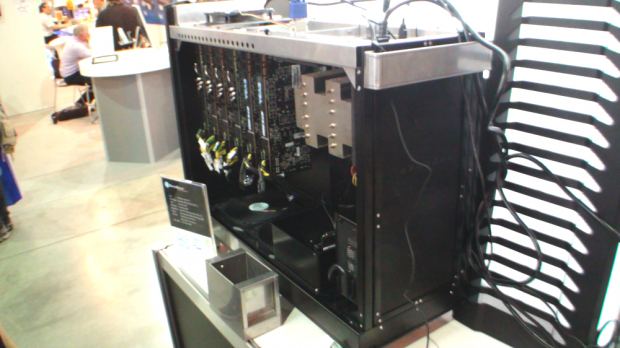 The TJ12 is still in early development and will no doubt see some changes before it goes into production until sometime next year. They are still playing around with the cooling design and hard drive bays.