The prototype NAS devices we saw are codenamed TopTower and they had three models on display including the N6, N8 and N10. The big daddy N10 comes with no less than 10 drive bays with SATA III support for full performance.

Each of these NAS devices is based on the Intel Sandy Bridge platform, so expect very good performance. They come with not only gigabit LAN, but also USB 3.0 support for high speed transfers if you intend to hook one of them up directly to your PC that also has USB 3.0 support. Not only that, but these devices also add in HDMI output which means you will be able to use these devices as somewhat of a media player, too. We didn't get to see that part of the interface, but it will be interesting to see what Thecus come up with. 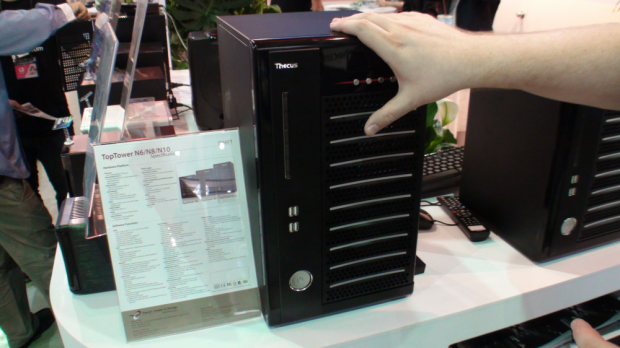 At this stage we do not have any details on pricing or availability, but expect them to be popular once they come up. Vincent from Thecus did say to expect them to be reasonably priced - not cheap, but not ultra expensive.