We met up with Ramsom from Thermaltake who introduced us to their brand new white Level 10 GT called the Snow Edition. It's basically the same as the original Level 10 GT, but apparently due to market demand, Thermaltake take decided to offer a white version. The difference here though is that the case is not painted, it uses a coating technique called plastic injection. This essentially makes the case scratch proof and it should maintain the original color and not fade like others do. Ramsom tried to spoil the case, but without success. 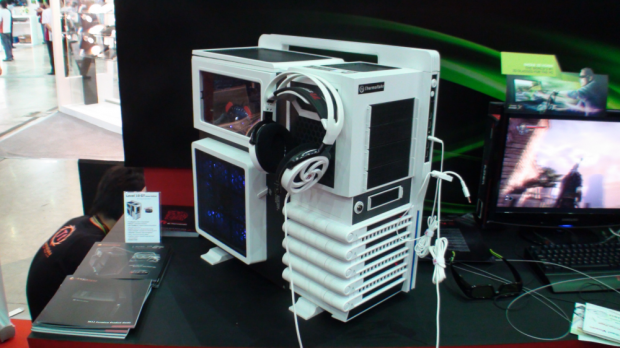 Next up in the same video above we also got a look at the completely crazy (hopefully) upcoming Frio GT CPU cooler. This absolute monster of a cooler comes with no less than four 120mm cooling fans and that's all dedicated to the CPU with up to 300 watts of cooling potential. This cooler is designed especially for the Level 10 GT and I forgot to ask if it would fit in other cases, but if it does end up going on sale (not decided yet), you'll have to check into it a little more.