NewsReviewsArticlesGuidesGamingAsk the ExpertsNewsletterForums
CPUs, Chipsets & SoCs
AMD have pushed 5 million Fusion-based processors into the market, taking pot shots at Intel's ageing Netbook franchise. Netbooks are usually sub-$350 laptops that are average in specs and are all within a certain spec limit of each other. This makes the market stagnant as there aren't many differences between them. Because of the tablet market being so successful for Apple and now Google, this Netbook market is shrinking. 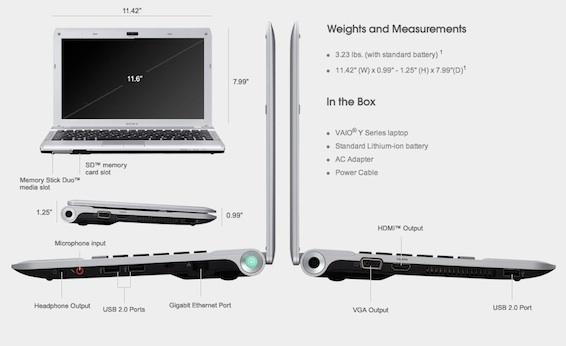 Above, we have a shot of Sony's AMD-powered Y series "small laptop". AMD however, told CNet it had "sold out" of their Fusion processor in it's recent fiscal quarter. Raymond Dumbeck, product marketing manager for AMD's mobile products had said "Demand far exceeded supply". AMD has said they have delivered about 5 million Fusion chips since their introduction in Q4 2010, and that includes between 3.5 and 4 million in the most recent (Q1 2011) quarter.

Performance wise, AMD's Fusion-based chips might not completely overshadow Intel's Atom but it's enough for PC markets like Sony, HP and Lenovo to create new designs. Such as Sony and HP using Fusion-based chips in their 11.6-inch designs that are designated as "small laptops" - note, it's not a "Netbook".
NEWS SOURCE:news.cnet.com