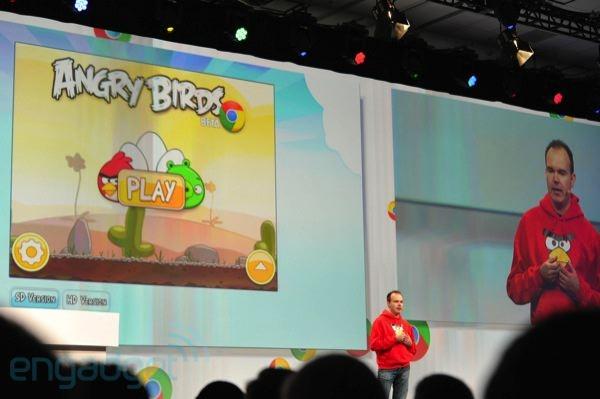 As we already told you , Angry Birds is now available for download in beta at the Chrome web store, right here. It runs on Firefox 4 and IE 9, but it was originally designed for Chrome, and that's what I recommend anyway after seeing this Keynote.

The Web Angry Birds was built in WebGL, but no worries, it still runs on Canvas. From the keynote, it appears that there's a simple click-and-shoot interface replacing the touch with which we're all so familiar, but I imagine the transition will be easy. I just now installed it, only took a few seconds.

Vesterbacka spoke at great, broken, length on how excited Rovio was to release AB for the web, jocularly citing how much they love the Chrome in-app purchase flat rate of 5%. Also, the vast offline storage that Chrome offers allows web-users to play the game in its entirety offline. You are now free to move about the cabin, slinging ornery avians at indignant swine.

Vesterbacka also mentioned that Rovio provided a "special treat" for Chrome users- all new, Chrome-themed levels available exclusively on the Chrome web-app. Chrome buttons have replaced some of the wood, iron, and glass and there are even Chrome bombs. Sick. And lastly, the Mighty Eagle will of course be available in Google's developer-friendly and seamless in-app purchasing process. In Vesterbacka's words:

Wouldn't it be nice if we had some sort of, I don't know, portable device that would give us access to all of this cool stuff? Just saying........
Newsletter Subscription