NewsReviewsArticlesGuidesGamingAsk the ExpertsNewsletterForums
Mobile Devices
I might have seen this one coming, but it was still great to witness. Pichai relinquished the stage to Vikas Gupta, one of the Google Chrome Product Managers on the payments team, who spoke briefly about the benefits of in-app web purchases to businesses, versus mobile. We've already seen a bunch of stats showing that web users (unsurprisingly) are more likely to make purchases in their browsers than on their phones, but the trick is to make the UX as seamless as possible so that "the rhythm" of their browsing experience does not get interrupted. 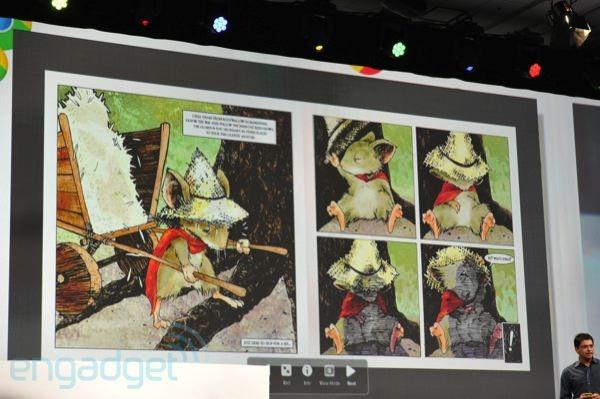 Vikas gave a nod to a really cool Chrome web application called Graphicly (which I have just installed on my Chrome as of the writing of this post) that helps users read and discover comics and graphic novels on the web. With 600,000 people viewing this Keynote, I can only imagine what this kind of publicity will do for Graphicly. Then again, you should all be reading more comics anyway.

How easy is it as a developer to implement in-app payments in your Chrome web-app? Try one line of code. Boom. Done. After Vikas made a thinly-veiled stab at Apple's developer-back-breaking in-app purchase rate of 30% (without actually naming Apple, but did anyone really not get the ref?), he announced that because Google loves their developers and they want to continue to foster their community.... *drum roll*.....the in-app purchase fee will always be a flat rate of 5%! Five percent? That is nothing! That's incredible. This goes way beyond "Don't Be Evil". This is incredible. And it's all open source, on top of everything else.

I just heard from a little (angry) bird that a certain extremely popular mobile application that may or may not be a game that would be very pleased to hear this....