All NewsBusiness, Financial & LegalCases, Cooling & PSUContests & GiveawaysCPU, APU & ChipsetsDealsDisplays & ProjectorsGamingMotherboardsScience, Space & RoboticsStorageVideo CardsVirtual & Augmented Reality
All ReviewsAll ArticlesAudio, Sound & SpeakersCases, Cooling & PSUCPUs, Chipsets & SoCsComputer SystemsDisplays & ProjectorsGamingMotherboardsNetworkingPeripheralsStorageVideo Cards
GuidesGamingAsk the ExpertsNewsletterAboutForums
Windows 11Halo InfiniteBattlefield 2042Elon MuskGTA 6RTX 3080HDMI 2.1Bitcoin Mining
Science, Space, Health & Robotics
This could well be the future folks, reprogrammable chips. Startup company, Tabula, is trying to create the hardware equivalent of software - a chip that over time, can have hardware improvements without completely replacing the device. If a programmable chip like this makes it to the market, it would replace the current mantra of replacing the entire device when a new, faster device comes out. 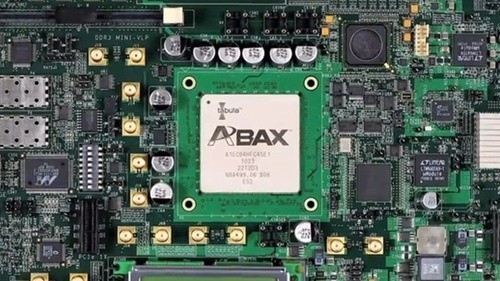 Tabula hopesto change this and their technology is vastly different - they've solved this issue by allowing the chip to mimic the way a stacked, 3D chip might function. Tabula explains this like a person stepping into an elevator that doesn't move up or down. If the doors close the floor outside is (very) quickly rearranged to look like a different floor - when the doors open a person inside the elevator would think they have traveled to a different floor - but they have not moved at all. This improves speed because the person doesn't actually physically move.

Tabula's magical chips are capable of reconfiguring themselves in eight different ways at a rate of 1.6 gigahertz (this is 1.6 billion times per second). Insane numbers. This means a single chip can function like an eight-layer chip, fooling data into thinking it has hopped to a completely new layer on the chip.

The speed of the chip mixed with the advantages of being updatable could mean gigantic, tectonic shifts in the computer and electronics industry. This of course hangs in the balance of delivering this technology to the masses. Right now there are a few roadblocks for Tabula's ideas: reconfigurable chips use tonnes of power, secondly - this type of jump in tech is not cheap.

But, Tabula have recently secured $108 million in funding which is the largest round of investment acquired by a chipmaker in a decade - this is a sign of confidence.
NEWS SOURCE:gizmodo.com.au