For starters Cedartrail was officially launched, this is Intel's latest Netbook platform. There were no details on what performance gains we are going to see, but three new features were added: Intel Wireless Streaming, Intel Music and Wireless file sharing. Intel is still behind the netbook category as tablets might be taking off in North America and EU, APAC is still seeing strong growth. Just because we in the West aren't buying doesn't mean globally they aren't still trending.

Oak Trail was also officially announced at the show with tablets hitting the streets in May. So far all the tablets are 10.1 inches and about 10mm thick. Nothing to get too excited about as we have yet to see what kind of battery life we might be getting. Some tablet manufactures like Evolve Three came out with a unique design integrating a kick stand and keyboard into the hard cover. 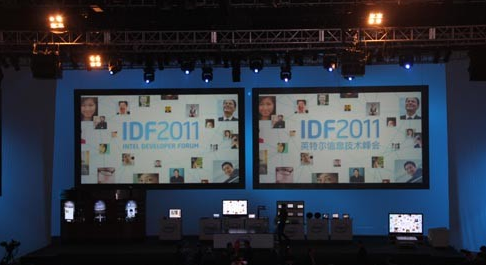 Game hardware maker Razer announced on day two that it is bringing the Switchblade, the most innovative Oak Trail device to date into the Chinese market first. Who do you think is going to be providing the games for this platform? Why, Tencent, of course! So, on day one of the conference, it announced it has plans to build games leveraging the power of Oak Trail using MeeGo, and on day two it announced a partnership with the hottest Oak Trail device currently coming to market.

Razer and Tencent are bring four immensely popular online games with roughly 600 million monthly gamers to mobile. Razer is going to focus optimization of the Switchblade on League of Legends as well as Dungeon & Fighter, Crossfire and QQ Speed. Tencent sees 130 million active monthly users between the four games and views Oak Trail as the mobile computing platform able to deliver a powerful gaming experience. Though the Switchblade is currently running Windows 7, both Tencent and Razer concluded that they were interesting in the possibility of delivering MeeGo on the device.

Check out my events round up video if you want to really understand what went on at IDF Beijing 2011.