"What do you do when you have bugs in your code? Send in the Angry Nerds. Consider these issues...resolved."

Check out the site, you can even test out the game there. This is almost good enough to not be an April Fools Prank. They even put up a fictitious collection of "endorsements": 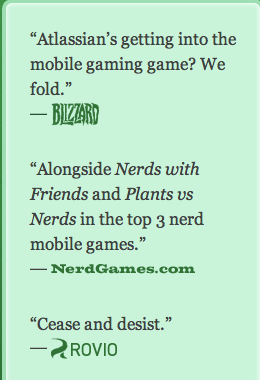 Okay, a bit of a curveball, but let's face it: gaming is hot. It was probably obvious we were into gaming when we invited Steve Wiebe, from the movie King of Kong, to our GDC booth for a record attempt. We're purists mostly - Pacman, Donkey Kong, WoW. But mobile gaming is blowing up right now, and when we see a market opportunity, we jump on it.

So we're pumped today to release our first game: Angry Nerds. The story line is one for the ages - a team of software developers, armed with wit and wile, fighting against an evil hoard of bugs. It's all drama and suspense. Romeo and Juliet, Lord of the Rings, Zero Wing.

But don't focus on the story. Focus on the physics engine. Because that, my friends, is where the magic happens. What our friends at Rovio started, we perfected. These nerds don't just fly across the screen - they drop out of the sky like Newton's apple. Engineering has been working on this for months, tweaking the X to get more Y, reducing the Y to get less X. What you see belongs not on an iPhone or a Droid - it belongs in the Smithsonian.

So take it for a spin, let us know what you think.

Disclaimer: This is a work of fiction. Names, characters, places and incidents either are products of our imagination or unintended coincidences. Any resemblance to actual events, locales or persons we work with is entirely by accident. (Except for the front-end guy. That one is spot on.) The authors shall remain nameless.