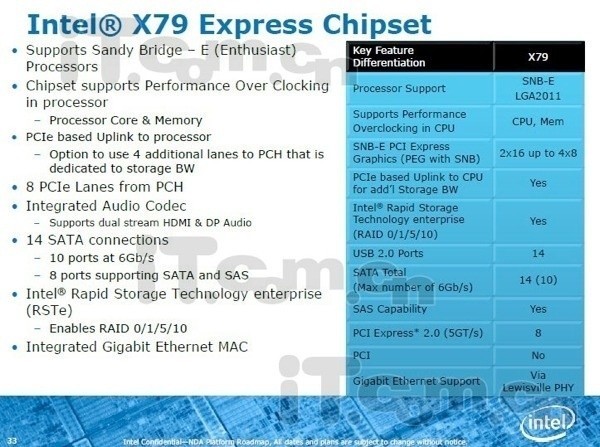 The new platform will feature the LGA 2011 socket and will have the PCI-e hub moved from the northbridge to the processor die - like the P67. The X79 chipset also gets a DMI connection to the processor but includes an additional PCI-Express 2.0 x4 link to the processor's PCI-e hub, for a total bandwidth of 8GB/sec to support the integrated 10-port SATA 6Gbps controller plus four 3Gbps ports.

At the moment there is still no talk of an integrated USB 3.0 controller or Thunderbolt, strange.

X79-based boards will be capable of two PCI-e x16 @ x16 or four PCI-e x16 @ 8x slots and will include at least four DDR3 slots since the tech is capable of quad-channel memory.
NEWS SOURCE:techspot.com