The Crytek section looked like a scene from Risky Business: GDC (+ pants) with all of the dudes wearing the Real 3D glasses, both spectating and playing. The camera really doesn't do it justice, but the 3D here is top of the line. And it would have to be, as the Crytek demo area was crowded from beginning to end of Friday's Expo. 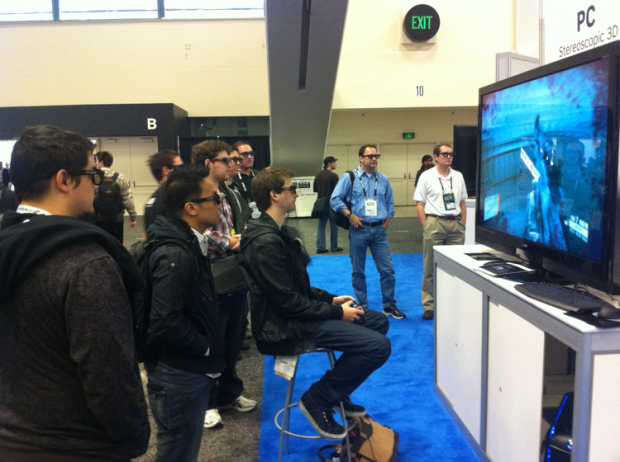 Part of that is undoubtedly due to Crysis 2's environment within the game. Unlike a lot of FPS's these days, the surroundings in Crysis 2 are very subdued, and reactive rather than constantly shifting and moving. The player is immersed almost seamlessly within the action because of how easily accessible it is. Though the gameplay is enhanced, there are few 3D gimmicks here (flying random projectiles, unnecessary "gotcha" pop-ups, etc), which sets it apart from much of the 3D media out on the market now (Don't get me wrong, I know it was absolutely imperative that the Justin Beiber movie was in 3D).


As far as the mechanics of Crysis 2, I was underwhelmed. At first I was irritated at not being able to change the controls to Inverted, and I found myself looking at the sky or the beautifully rendered concrete while another player was gleefully donking the hell out of me. I ventured over to the NVIDIA booth later where they had Crysis 2 running on their triptych monitor gaming display, which increases peripheral vision in any game- particularly useful for FPS environments when people are coming out of nowhere, especially in Crysis when they have the stealth suit option. 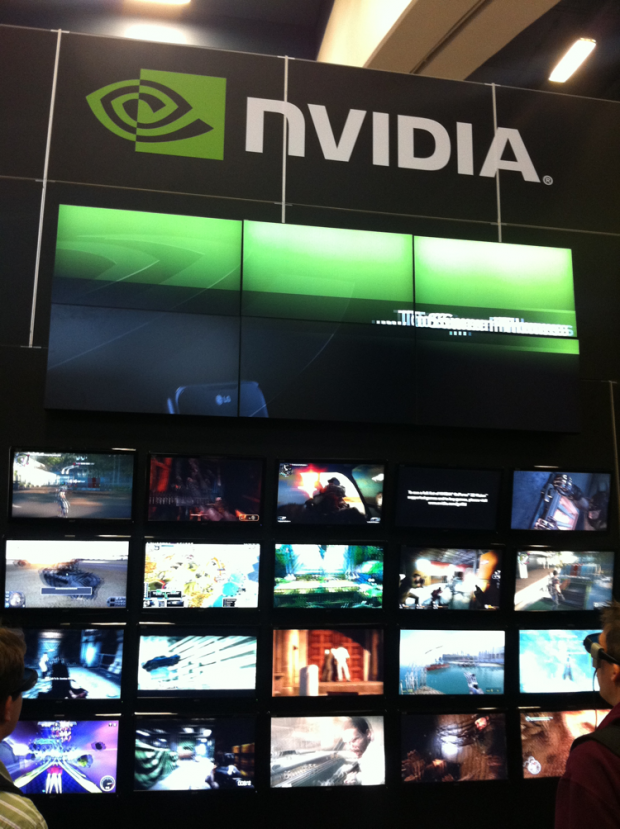 I was disappointed at how inaccessible the controls were, even on the familiar WASD keyboard environment. The incredible array of in-game features is almost distracting when it comes to what should be the main goal of any FPS: frag the other dude! The beginning skill level necessary is extremely intimidating in a multiplayer environment, and I would recommend any newcomers spend a good amount playing campaign before getting mercilessly destroyed in online PvP.

Bulletstorm, however, did not for one second disappoint. I had read reviews and seen screenshots as well as gameplay online- I'm generally put off by unecessarily gory or obscene video games as I believe they tend to take away from gameplay and further numb our already technology-addled brains to reality. I happened upon a deserted demo station and decided to try it out in the spirit of morbid intellectuality.

I think I stopped about half an hour later. Moreover, I found myself (un)consciously gravitating back to that spot or other Bulletstorm demos around the Expo because I could not get enough. 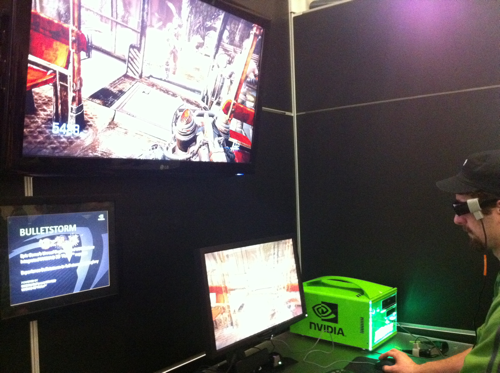 I ended up trying it out on NVIDIA's much hyped 3D engine, but I have to say I wasn't as impressed as with Crytek. Maybe it's the gameplay of Bulletstorm with everything rushing at you and exploding all the time- but it definitely irritated my eyes/brain/temporal cortex- then again, I did continue to play it headache notwithstanding for 30 more minutes.

Bulletstorm is hands-down the most accessible FPS to come out in a long time, and the 3D is completely optional for enjoyment. Sadly, the one downfall is how gory and profane the game becomes (sorry kids, your parents won't be getting this one for you for any holiday), but it doesn't take away from the gameplay. The "kick" and "lasso" melee options are insanely entertaining, the weapons are fantastic and the gameplay is so fun that you stop caring about the storyline within 0.5 seconds. Who cares why these tattooed, mangled, axe and gun wielding psychos are rushing you? Dude, you can kick them into a giant carnivorous plant. Yes, a GIANT CARNIVOROUS PLANT. And it will eat you if you get close enough. Let's also not forget the absurdly dynamic environment: I killed a guy with a hotdog stand, which by the way unlocked an achievement and gave me +5000 points.

More information on Crytek, Cryis 2, NVIDIA and Bulletstorm. Crysis 2 ships March 22nd, Bulletstorm is already out. So go buy it. Even if you don't have a compatible system. It's that good.