All NewsBusiness, Financial & LegalCases, Cooling & PSUContests & GiveawaysCPU, APU & ChipsetsDealsDisplays & ProjectorsGamingMotherboardsScience, Space & RoboticsStorageVideo CardsVirtual & Augmented Reality
All ReviewsAll ArticlesAudio, Sound & SpeakersCases, Cooling & PSUCPUs, Chipsets & SoCsComputer SystemsDisplays & ProjectorsGamingMotherboardsNetworkingPeripheralsStorageVideo Cards
GuidesGamingAsk the ExpertsNewsletterAboutForums
Chia Coin MiningRTX 3090RTX 3080RTX 3070HDMI 2.1Bitcoin MiningBattlefield 6
TRENDING NOW: There's a single Dogecoin holder with 28% of supply worth $23 billion
Mobile Devices
According to the twitter-stream-throttling hashtag #ipad2, everyone in the world is talking about Apple's newest post-PC product release, announced today at the Yerba Buena Center in San Francisco. Despite rumors of his failing health, a very chipper-looking Steve Jobs showed up to deliver the keynote presentation, which in true Apple style rolled out all of the next-gen iPad's newest features, many of which confirmed previous rumors and speculations about the device. 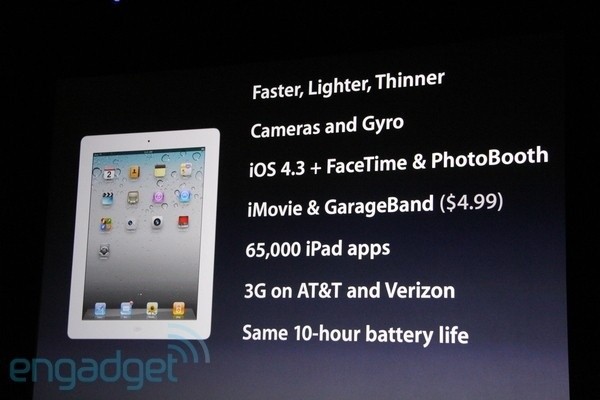 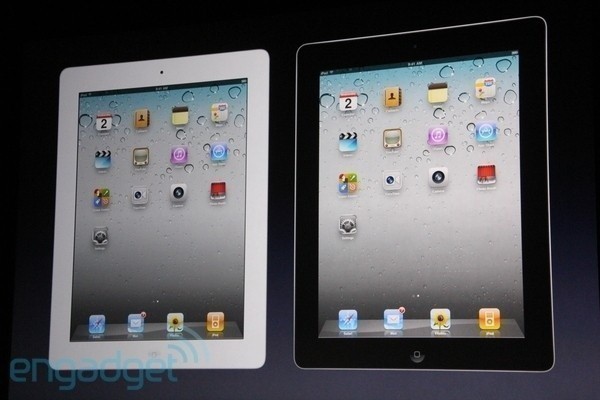 The iPad 2 is slated to ship March 11th in the United States, and will bring with it (among mass hysteria and frustrated Apple Store customers) a host of "long"-awaited specs:

And let's not forget that both the next-gen iPod touch and the GSM iPhone will be out the very same day. And for those of you living in not America, it will most likely ship to your country on March 25th.

The iPad 2 is available in both white and black and starts at $499 for the 16GB with WiFi, just like the last one.

The iPad 2 still does not have a USB port or Flash (shocker), and the screen, though larger, has the same resolution as the original- but between the improved iPad-specific apps like the versions of iMovie and GarageBand demoed at the launch and the two cameras that will allow for great development and user interactive experiences, there will most likely be little about which to complain.
NEWS SOURCE:engadget.com
Newsletter Subscription