NewsReviewsArticlesGuidesGamingAsk the ExpertsNewsletterForums
GIVEAWAY: Sabrent Rocket Q 8TB NVMe PCIe M.2 SSD worth $2000!
Business, Financial & Legal
NVIDIA and Intel are now playing nice. I'm guessing this is because AMD is about to open up a can of whoop ass on them (all the pun in the world intended there, you may remember the tattoo, etc). 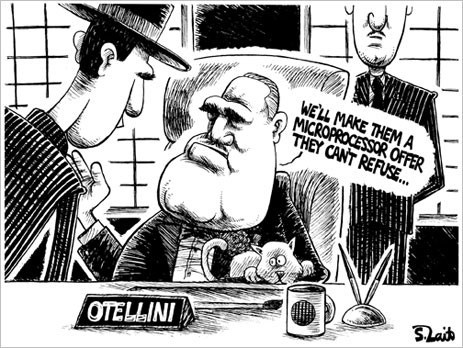 NVIDIA and Intel have announced a new six year cross-licensing deal that will have Intel coughing up $1.5 billion over five years to NVIDIA, to gain access to their technology, while NVIDIA gain access to some of Intel's patents.

Both companies have agreed to drop all pending litigation. NVIDIA have said that they have "no intentions to build chipsets for Intel processors," and that Intel will be allowed to use NVIDIA's technology in Sandy Bridge.
NEWS SOURCE:engadget.com