NewsReviewsArticlesGuidesGamingAsk the ExpertsNewsletterForums
Cameras
CES 2011, Las Vegas - JVC has unveiled several new camcorders at CES, but the coolest of them all is certainly the new GS-TD1. The TD1 is the world's first consumer video camera that can record in full 1080p HD in 3D. The camera has dual lenses and each lens gets its own 3.32MP CMOS senor for making the 3D images just like the human eyes do. 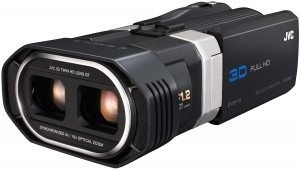 Each of those images can be grabbed in 1920 x 1080 resolution and the camera can shoot in LR independent format and can shoot in side-by-side format as well. The camera only has 5x optical zoom. You have to give up some of the zoom you typically get in a camcorder today for the 3D capability.

The camera also has an optical image stabilization system and a 3.5-inch touchscreen LCD on the side for controlling the camera. The screen can show the 3D video and stills that you shoot with the camera without needing glasses of any sort. It also supports 3D time-lapse recording and it has 64GB of internal storage. Storage can be expanded with SD cards and the camera will sell for $1999.95 when it ships in March.
NEWS SOURCE:newsroom.jvc.com