All NewsBusiness, Financial & LegalCases, Cooling & PSUContests & GiveawaysCPU, APU & ChipsetsDealsDisplays & ProjectorsGamingMotherboardsScience, Space & RoboticsStorageVideo CardsVirtual & Augmented Reality
All ReviewsAll ArticlesAudio, Sound & SpeakersCases, Cooling & PSUCPUs, Chipsets & SoCsComputer SystemsDisplays & ProjectorsGamingMotherboardsNetworkingPeripheralsRAMStorageVideo Cards
GuidesGamingAsk the ExpertsNewsletterAboutForums
RTX 3090 TiRTX 4090Diablo 2GTA 6Halo InfiniteElon MuskRTX 3080HDMI 2.1
Video Cards
I think that all gamers and computer enthusiasts can agree that for the most part the only difference between video cards from different vendors is the name on the sticker and the bundle that comes with the card. One stock clocked GTX460 is the same as another when you get down to it. If you are in the market for a new video card, a company called Colorful has a new offering that has a really cool bundle and is very limited edition. 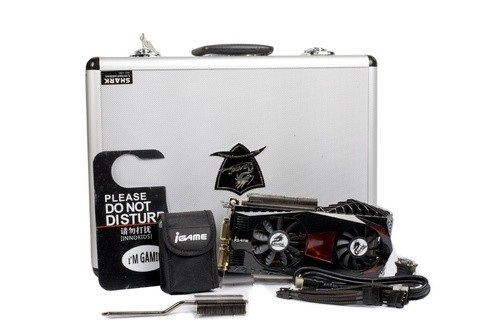 The card is called the iGame460 Commemorative Edition and only 50 of them will be offered in the entire world. That exclusivity gets you an NVIDIA GTX 460 video card with a really cool heat sink and fan. The card has dual fans and the shroud over the fans has lots of angles for good looks. It has an interesting customizable cooling solution. That spike and heat sink you see on the bottom of the picture above is actually a heat pipe that you can add onto the card if you want to.

The card and its accessories come packaged in a metal look suitcase with foam cutouts on the inside. The customizable heat sink is known as the Air-Kit aero. The card also includes something called a network snake power cord. I have no idea exactly what that is. Pricing and availability are unknown. The card has 2GB of RAM and the clock speeds are 890MHz on the core and 4000MHz on the RAM.
NEWS SOURCE:vga.it168.com