NewsReviewsArticlesGuidesGamingAsk the ExpertsNewsletterForums
GIVEAWAY: Gaming peripherals upgrade thanks to Corsair worth $280
Mobile Devices
The latest news around the Skype rumor campfire is that they have been saying that a "series of video-related announcements" are coming at CES in a couple of weeks. Could this be the video calling feature that nearly everyone's been waiting for? 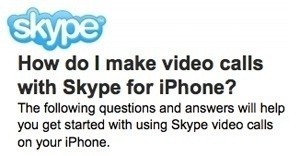 Engadget received word from Skype already on how to make video calls on the iPhone, so it looks like the official leakfest is in full force. There's no official word out the for those of us with Android, Symbian, or anything else non-iOS related, so we'll have to wait and see. Skype's full-fledged domination of video calling from nearly any platform could be complte with a full release on all major mobile operating systems.
NEWS SOURCE:engadget.com