NewsReviewsArticlesGuidesGamingAsk the ExpertsNewsletterForums
Mobile Devices
It seems like every day another company is announcing a tablet unveiling at CES. The latest to jump on the bandwagon is Viliv, who are going to be unveiling two new Android tablets and a Windows 7 based tablet at CES. 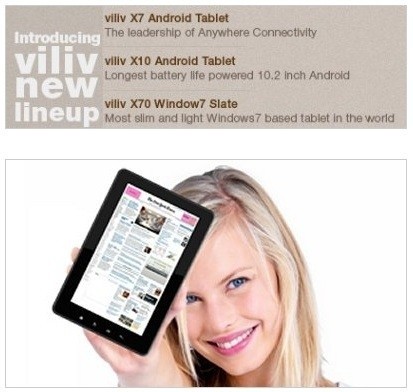 Details are fairly sketchy at this point, but what is known is that the Android based tablets will be called to X7 and X10, with the X10 tabbed as having the longest battery life of any 10 inch tablet. The X70 "slate" will be Windows 7 based and is being hailed as "most slim and light Windows 7 based tablet in the world." More to come at the official unveiling in a couple of weeks.
NEWS SOURCE:engadget.com