NewsReviewsArticlesGuidesGamingAsk the ExpertsNewsletterForums
Gaming
The guys and gals at Valve are a very festive bunch, with Steam having another Holiday sale and this one being a doozy. Steam are discounting over 1000 games and the Holiday sales run through til January 2nd. 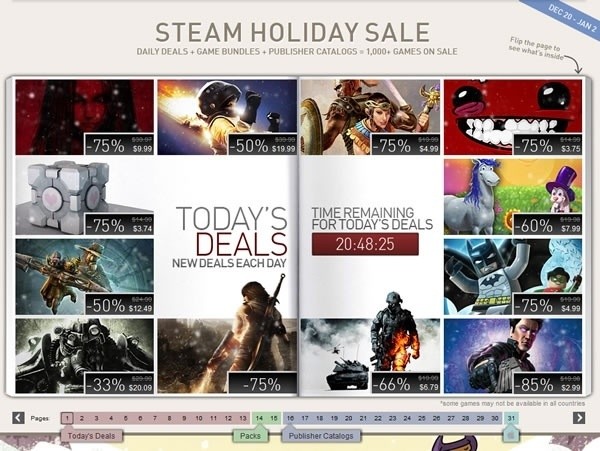 Each day brings a new batch of sales - today's sales include Battlefield Bad Company 2 for $6.79 (which I just picked up for my newphew as an early-Christmas present, shoutout to Cozza!), that in itself is 66% off making it a huge bargain to go along with the newly released Vietnam pack for Bad Company 2.

Prince of Persia, Super Meat Boy and FEAR Bundle are also on sale today. Alongside the daily deals, Steam has also gone a step further on publisher catalogs. 2K Mega Pack ($79.99) features over 36 games and expansions including BioShock 2, Mafia II and Borderlands. There are similar bundles available from THQ, Bethesda, Square Enix / Eidos, Epic Games, Valve and many others.