NewsReviewsArticlesGuidesGamingAsk the ExpertsNewsletterForums
GIVEAWAY: Gaming peripherals upgrade thanks to Corsair worth $280
Mobile Devices
I would wager that most iPad users have at one time or another wished that the tablet had a stand that would prop it up for watching video so they didn't have to hold the tablet and look down to watch. Since Apple didn't include that feature from the factory, the only thing you can do is opt for a stand of some sort or get a case like the cool new iSkin aura for iPad. 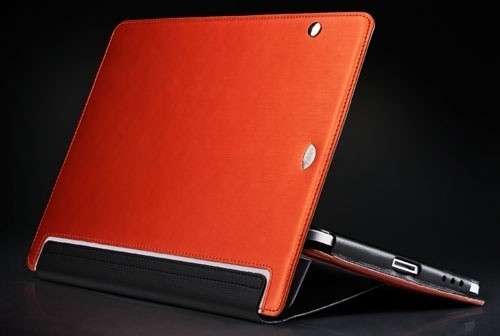 The aura comes in black, orange, or beige colors and they all have a metallic finish, which appears to be some sort of vinyl with an embossing. The cool part about the aura is that the case is made to protect your iPad for drops and scratches while propping the screen up in two heights depending on what you are doing.

The screen can be propped at a low angle for typing on the on-screen keyboard and it can be propped at a higher angle for watching video. The case also looks really cool; I particularly like the orange version. You can buy yours right now for $119.99 with free shipping until the end of December.
NEWS SOURCE:iskin.com