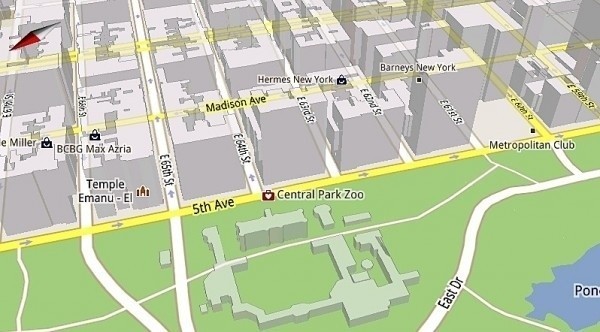 The biggest change of Google Maps for Mobile 5 is the dynamic map drawing - vectors instead of flat images that scale much better and will show the buildings fleshed out for over 100 cities.

More additions include the ability to use two fingers to tilt and rotate around the map (in addition to pinch-to-zoom), storage of the vectors are much smaller than the current images which leads to offline caching. Maps will now be kept on a file of the locations that you go to and search the most often - from there it'll be able to reroute while offline in Navigation.

You'll still need a connection for altering the route altogether.

Supposedly, most modern Android handsets from the original Droid onward should be able to enjoy most if not all the new features, of course this depends on the handsets support for say 3D rendering or "distinct multitouch" hardware support. For example, Nexus One supports vector maps but not the rotate functionality because it lacks the multitouch requirements.

A list of phones that 100-percent support all of 5.0's features? Well, look below: