All NewsBusiness, Financial & LegalCases, Cooling & PSUContests & GiveawaysCPU, APU & ChipsetsDealsDisplays & ProjectorsGamingMotherboardsScience, Space, Health & RoboticsStorageVideo Cards & GPUsVirtual & Augmented Reality
All ReviewsAll ArticlesAudio, Sound & SpeakersCases, Cooling & PSUCPUs, Chipsets & SoCsComputer SystemsDisplays & ProjectorsGamingMotherboardsNetworkingPeripheralsRAMStorageVideo Cards & GPUs
GuidesGamingAsk the ExpertsNewsletterAboutPrivacyForums
AMD Zen 4Intel ArcBattlefield 2042RTX 3090 TiRTX 4090RTX 4080GTA 6Elon MuskHDMI 2.1
Motherboards
Here is one for the books! If you've been in the PC scene for some years, you'll remember back in the day that a guy by the name of Jonathan Wendel or "Fatal1ty" as he is known in the online world by his gaming tag, made some of the best gaming motherboards on the market with the once king we knew as ABIT.

Fast forward several years. I get a call from ASRock earlier this week saying that they have a special guest in town and I should come out to their office for an interview. Of course, that special guest from the US was Fatal1ty. He is in town to introduce his new Fatal1ty P67 Professional gaming motherboard exclusively to us here at TweakTown.

The Fatal1ty product team decided to work with ASRock after discussions started back at CeBIT in Germany earlier this year. Development has been on-going for the past two or three months and both sides are finally ready to show-off the fruits of their labor and planning. According to Jonathan and his team, ASRock was selected since they consider the Taiwanese motherboard maker "craftsman of motherboards" after inspecting its engineers and products over time. 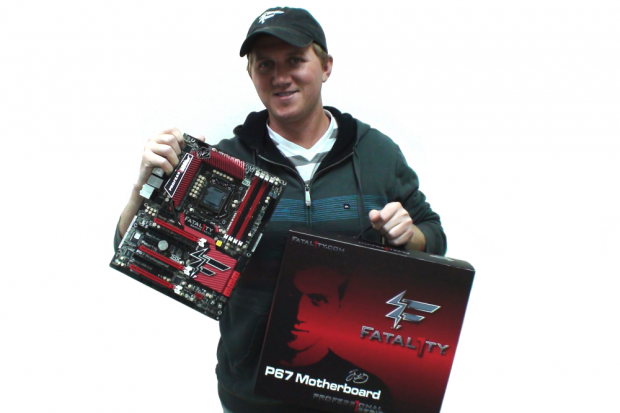 In the video above we speak with Chris Lee from ASRock Marketing and the man himself, the renowned American gamer with a new product in his hands to show off to the world. This is the first motherboard to come from the partnership and if it is anything to go by, gamers around the world ought to give it some attention, as it is designed directly with this crowd in mind.