NewsReviewsArticlesGuidesGamingAsk the ExpertsNewsletterForums
Mobile Devices
There's a lot to like about Apple's iOS 4.2 update; especially if you're an iPad owner. Then again, Apple has given as well as taken away. Their help forums are all abuzz because the update has rendered many previously iPad friendly USB devices useless. If you've got this problem, here's why: 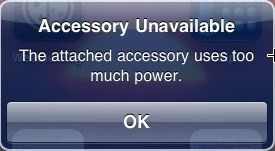 The culprit in the update is that the USB power output has been dropped from 100ma to 20ma, making more power hungry card readers, keyboards, and such unable to get the juice they need to function even if they are straight from Apple themselves. Expectedly, this has iPad owners in an uproar that use their device for photo manipulation and with higher power devices. Nothing official from Apple on why the change was made has been released.