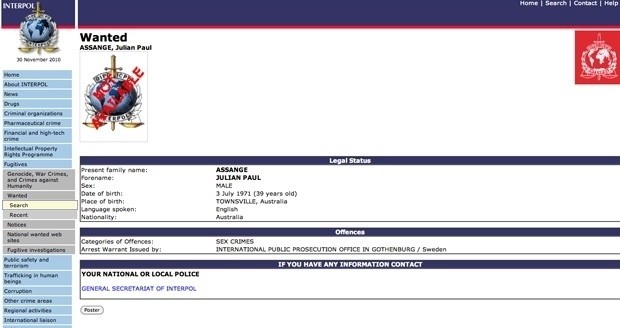 If Assange returns to Australia (his home country) he may face criminal charges. He is also under investigation in the US for espionage. The Interpol charges are relating to rape allegations made by two different women in Sweden back in August.

It all sounds crazy to me, man leaks sensitive Government files (it's not like he is making this stuff up), within 2 days said man is then magically wanted for "Sex Crimes", why was he not on the Interpol list in August for Sex Crimes? Or arrested in the various interviews before this latest leak from WikiLeaks was... leaked?

If you're reading this Julian Assange - I hope you've got some crazy wig on to hide from Interpol.
NEWS SOURCE:techcrunch.com