NewsReviewsArticlesGuidesGamingAsk the ExpertsNewsletterForums
Business, Financial & Legal
HP announced a few months ago that it has planned to move out of the area in the below picture, Apple have purchased the 98 acre area of land that will roughly double their current HQ in Cupertino. 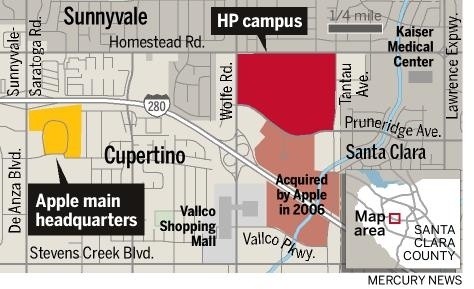 The move helps Apple, as they're bigger than ever right now - they have hired an extra 12, 300 employees which raises their workforce to 46, 600 workers - many of them in Cupertino.

The exact price Apple paid is unknown, but it is rumored to be hovering around the $300 million mark - chump change for the company which made $65 billion in sales last year alone.
NEWS SOURCE:kitguru.net