All NewsBusiness, Financial & LegalCases, Cooling & PSUContests & GiveawaysCPU, APU & ChipsetsDealsDisplays & ProjectorsGamingMotherboardsScience, Space & RoboticsStorageVideo CardsVirtual & Augmented Reality
All ReviewsAll ArticlesAudio, Sound & SpeakersCases, Cooling & PSUCPUs, Chipsets & SoCsComputer SystemsDisplays & ProjectorsGamingMotherboardsNetworkingPeripheralsStorageVideo Cards
GuidesGamingAsk the ExpertsNewsletterAboutForums
RTX 4090Windows 11Halo InfiniteBattlefield 2042Elon MuskGTA 6RTX 3080HDMI 2.1
Gaming
We all know what they say about fools and their money right? A gamer from China has supposedly dropped $15,000 on a night of playing his favorite game on a gigantic screen that measures 820-feet long. The dude played some Chinese language MMO title and is said to be a guild leader. I suspect this may be a publicity stunt by the company behind the game. 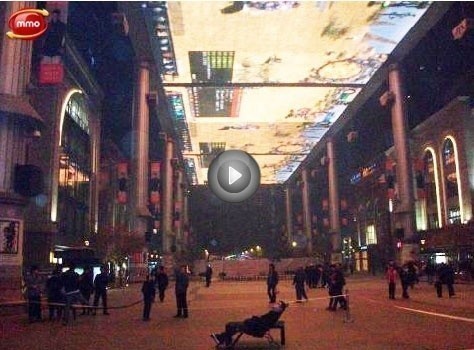 The massive screen is in Beijing and is actually three different screens. The dude didn't get to stretch the game across all three of the screens because of the resolution issues. He ended up having three versions of his desktop on the ceiling and what had to be the worst neck crick in history.

For his $15K, all he got was a deckchair and some yellow tape around him to keep folks walking by from bothering him. I can think if a few ways to blow $15K, this is not one of them. I think that having the desktop tiled on each screen was better than spanning the screen across them all. It would have been impossible to see one end to the other and keep all of the action in your field of view.
NEWS SOURCE:kotaku.com