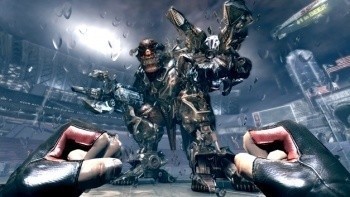 Now that the game has been handed to Gearbox, we will actually have a chance to play it - despite the years of delays for DNF from 3D Realms, it was continuing to be a black hole for funds, with George spending tens of millions out of his own pocket. He has also given a short explanation of what that money was spent on.

There have been numerous reports that Duke Nukem Forever was constantly delayed because they wanted to reach "perfection" - but Broussard says it was due to development issues and bad luck. Broussand says that the game only stayed alive because of his love for the project.

"I wish there was an easy or dramatic answer for what took so long but there just isn't," he told Maximum PC. "It was just never ready. We had lots of development issues along the way. It wasn't a quest for perfection as some silly article in Wired implied last year."

For example, Broussard revealed that "licensing engines and trying to change them too much" was what slowed Forever's progress down the most. He adds: "Sh*t happens and after delays the options are to continue or kill the game. I never wanted to kill the game."

In 2007, DNF found the light and was on it's way toward it - with most of the game "as it exists today" being created between then and now. Although, Brossard states that DNF hitting stores someday is only the result of "several back to back miracles". He explained this as "imagine flipping a coin 5 times and getting heads each time".

Well, I'm sure Duke gets head each time - judging by the videos leaked from various sites.

I'm just glad I'm not 65 with the game finally getting released, let's just hope it's not another console port!
NEWS SOURCE:escapistmagazine.com