NewsReviewsArticlesGuidesGamingAsk the ExpertsNewsletterForums
GIVEAWAY: Get in the game with XPG - keyboard, headset and mouse pad
Mobile Devices
The first big roadblock to Windows Phone 7 modding has been found. According to Conflipper, a former Windows Mobile hacker, Windows Phone 7 devices ship with a "Genuine Software" checker which gives you the screen below if you try to access Xbox Live, Marketplace, Windows Live, or Zune from a device running an OS version that doesn't match up with your hardware key. 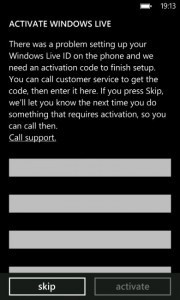 This grouchy screen isn't the only drawback to hacking a WP7 device. Mobile users who are found modifying their phones to run pirated games or fiddle with their Xbox Live achievements will get perma-banned from Xbox Live; much like the policy on modded Xbox consoles.