NewsReviewsArticlesGuidesGamingAsk the ExpertsNewsletterForums
GIVEAWAY: Get in the game with XPG - keyboard, headset and mouse pad
Video Cards
KitGuru have an analysis of NVIDIA's stock market performance, the results are a good read. 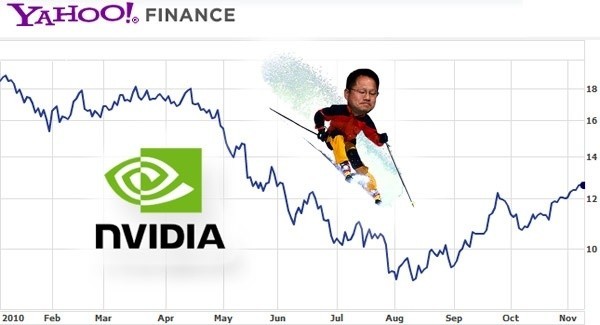 A bit of a tease, shows that NVIDIA were once rolling in $1 billion revenue a quarter, which has seen a steady decline because of the 4xx series lacklustre performance. But, with the 460 banging the drums of success and the GTX580 now out - is this a turn for the better for NVIDIA?

But, with the GTX460 being NVIDIA's only smashingly popular product - the rumors from it are that NVIDIA aren't making much profit per unit sold, with the recent price drops, is this even less? Are they making a loss? Only time will tell if their share prices increase back to the $19 high that the start of 2010 saw.
NEWS SOURCE:kitguru.net