NewsReviewsArticlesGuidesGamingAsk the ExpertsNewsletterForums
TV, Movies & Home Theatre
It looks like the line in the sand has officially been drawn between the big network TV companies and Google TV. FOX.com has joined ABC, NBC, CBS, and sites like Hulu.com in blocking their content from being shown on Google TV enabled devices. 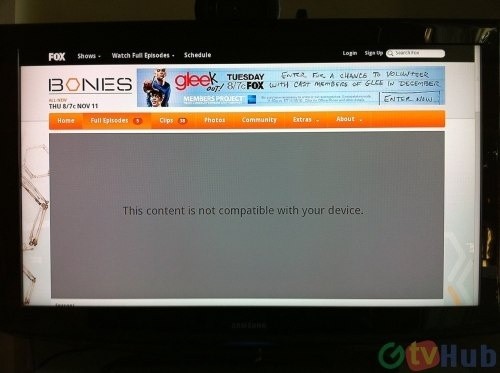 These blocks are also expected to happen on the Boxee Box, which is having its official unveiling this evening. Rumors have swirled about Google being in negotiations with the networks about solving this issue but nothing firm has been verified from either camp. It just seems a bit silly to have a setup that is dedicated to streaming TV that, well, can't play TV. Score once more for HTPC users, I suppose; at least until the hacking community finds a workaround.
NEWS SOURCE:engadget.com