All NewsBusiness, Financial & LegalCases, Cooling & PSUContests & GiveawaysCPU, APU & ChipsetsDealsDisplays & ProjectorsGamingMotherboardsScience, Space & RoboticsStorageVideo CardsVirtual & Augmented Reality
All ReviewsAll ArticlesAudio, Sound & SpeakersCases, Cooling & PSUCPUs, Chipsets & SoCsComputer SystemsDisplays & ProjectorsGamingMotherboardsNetworkingPeripheralsStorageVideo Cards
GuidesGamingAsk the ExpertsNewsletterAboutForums
RTX 4090Windows 11Halo InfiniteBattlefield 2042Elon MuskGTA 6RTX 3080HDMI 2.1
Laptops
Electronic paper screen are on the market in force with several different products being the same basic thing. We have ePaper and eInk for instance that are different flavors of the same tech that offers a black and white image on a screen that uses little power and lacks a backlight. These screens are very common today in devices like eReaders and you can find them on some watches even. 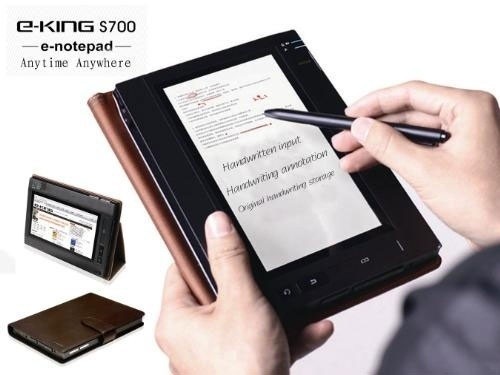 A company called EKING has unveiled a really cool new product called the S700 that claims to be the world's first E-notebook. The device is in a case that looks like a spiral notebook and inside that notebook is a 7-inch digital paper screen. The big difference between this digital paper screen and the ones on devices like the nook or Kindle is that the S700 has color. The screen also support two input methods with resistive touch and electromagnetic induction touch. That means the screen supports navigation with your finger and it recognizes handwriting from a stylus.

The S700 has 3G and WiFi connectivity and can surf the web and check email. Those emails can even be handwritten. When work is done, you can use the device to watch video and play games as well. Other features included a fingerprint security system and a 3MP camera. That camera can take photos of business cards and then put the contact information into the contacts list on the S700. The S700 sounds very interesting and the only issue is that we don't know the price or if the Chinese gadget will come to the US or other countries.
NEWS SOURCE:ekingumpc.com